Inside the Mind of a Writer Writing a Book 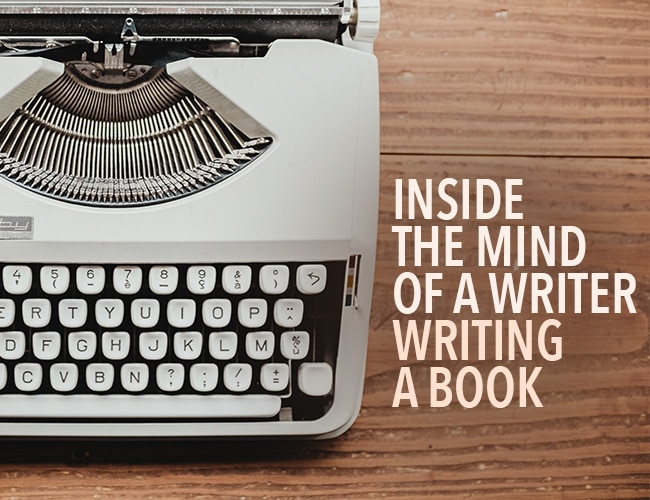 Today, I want to give you an inside view of my thoughts and emotions as I write a book so that you can see that even after being a professional writer for years and writing seven books, I still struggle with insecurity and self-criticism. Plus, I’ll share how I deal with negative feelings without getting derailed by them.

When Writing a Book, It’s Normal to Feel Insecure

I’m in the final stages of submitting my latest book to publishers, and now that the work is nearly over, I’m beginning the process of writing a new novel.

But starting over is hard. I’m finding the process is opening me up to familiar thoughts of insecurity and self-doubt, mental and emotional paths I’ve walked down again and again in my writing career.

If any of these thoughts below feel familiar to you, know you are not alone!

Here’s What It Feels Like to Write a Book

Do any of these thoughts sound familiar?

Hmm … maybe I can weave in the Syrian Civil War, the Mexican Drug War, and something to do with bitcoin.

If I base the book in Turkey, maybe I can schedule a trip to visit Turkey!

And I’ll have a romance subplot of course. Should it be bildungsroman?

I’ve been sitting here staring into space for an hour and a half. I’ve had three cups of coffee, gone to the bathroom twice, and played two games of Angry Birds … okay, four, and I’ve written three words.

What is this story even about? How do I even begin? All my ideas suck.

Some interruption of the usual rules.

But really, how much trouble can kids get into these days anyway?

I’m so annoyed with all these ideas

Later, after fleshing out a short outline

How do you write an adventure story?

You can begin like Crime and Punishment with a murder (or Brothers Karamazov for that matter). Or like Les Miserables with another kind of crime.

Are there any stories that take place in multiple countries that are not military thrillers?

But I’m not sure if I have any good stories to tell. This is where I struggle.

I need to stop thinking so hard. To relax and just write.

But then I relax and try to write and wind up just staring into space because I don’t know what I’m writing about and wind up thinking about other books by other great authors and not thinking of a new story of my own!

Maybe I’m just not good at this. Maybe I’m not good at “making up stories.” Maybe I’ll never be able to do what Dickens did, just tell a really good story. I could do what Hemingway did and work more like a journalist, going to different countries, finding stories or characters, and then novelizing them.

Maybe I’m not good at anything!

Maybe I’m good telling stories that already happened, especially that happened to me. I could write memoir!

But am I just going to be a memoir writer my whole life?!

Later, after returning to the short outline I had discarded because I thought it was terrible

Ugh I’m lost in this. I have the beginning, but then what? Where is the drama, the adventure? What is at stake?

Something bad has to happen. What is it?

What’s the worst thing that could happen?

Huh. Yeah, that’s pretty bad. How would that even work?

Hmm … I could see that working.

Hmm … this isn’t bad. It’s weird, structurally especially, but I kind of like where this is going.

Later, after finishing the outline

But then what … And how does the scope of this story work? Is that scope too narrow?

Hmm … I don’t know if there’s enough there for me.

But still, it’s something. It could actually be okay.

I like the story, but I don’t love it.

I probably need to not worry about that at this stage. Right? Or should I worry about it?

Actually I could see how this could be a pretty cool story. Maybe I’ll just write the first draft and see how it goes? It would be fun to be writing a novel again. Process is everything after all!

It’s Okay to Feel Bad While Writing Your Book. Just Don’t Give Up

Here’s the thing: When you’re writing, feelings are unreliable.

You should always listen to your feelings. They’re often trying to show you something important, perhaps letting you know to change tactics or go deeper. But don’t base your writing decisions on feelings alone, especially feelings of excitement or despair about your ideas. And whatever you do, don’t let your feelings lead you to giving up.

“Your feelings about your writing are unreliable. Listen to them, but don’t let them stop you from writing!Tweet thisTweet
Here’s How to Not Give Up When Writing a Book

At any point in this process I could have given up. I almost did give up, several times actually, and I probably would have, too, if I hadn’t used four strategies that I’ve discovered to help me stay focused on my writing.

For more on each of these strategies, check out my free book writing course, How to Write a Book, but in brief, the four strategies are:

An idea
A plan
A team
A consequence

Make sure to learn more about each of these book writing strategies here.

Remember: You CAN write a book. If you sometimes feel doubt or insecurity, that’s normal. I truly believe that anyone can write a book if they use these four strategies.

But you have to do the work. It won’t be easy, but it will be worth it.

Have you ever struggled with insecurity and self-criticism as you’ve tried to write a book? What does it look like for you? Let us know in the comments section!

Free write, or work on your work in progress. Write down everything you’re thinking, not just what’s relevant to your story. Include all your self-talk and any doubts or insecurities that come up.

Write for fifteen minutes. When you’re finished, copy and paste all the self-talk, including any of the doubts or insecurities that you wrote, and put them in a separate document. Then, if you’re feeling brave (and you are, right?), post those thoughts and self-talk in the comments section so that we can have a glimpse into your writing mind, too!

And if you post, make sure to encourage at least three other writers in the comments as well.

The post Inside the Mind of a Writer Writing a Book appeared first on The Write Practice.